The planned rewetting measures will serve to prevent permanent water runoff from the four bogs. Rain water retention on the bogs is to be improved in future so as to achieve water saturation of the peat body throughout the year, if possible. The planned hydraulic engineering works are mutually dependent and, combined, will lead to the desired re-wetting effect. The detailed planning now pending and the approval procedures subsequently necessary where water legislation is concerned are the next steps to be taken prior to implementation of the measures.

Excavator with caterpillar tracks in the process of constructing a peat bank (“Weißer Graben” nature reserve in the rural district of Nienburg) (picture taken by J. Fahning) 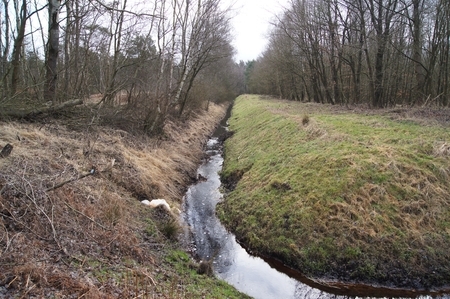 "Kaltenweider Hauptvorfluter" south of Bissendorfer Moor. Its drainage effect in the moorland area is to be rendered ineffective by closing it off. (Picture taken by J. Fahning)
Drucken